Julie Thomas MA, BA(Hons), Assoc CIPD, NEBOSH Certificate
Business Manager
Julie's career in education started in 2011, when she joined City College Plymouth as PA to the Deputy Principal. Whilst working at City College she became aware of a new school being built in Plymouth called UTC Plymouth, a school for 14-19 year old students, with a specialist curriculum in Engineering. Intrigued with this new concept in education she applied for the position of PA to the Principal, starting in the Summer of 2013 she was involved in setting up all administrative and operational process for the school. The role very quickly developed and with previous experience of office management and a Masters Degree in Personnel and Development she moved into the role of School Business Manager. In 2017 she obtained the NEBOSH Certificate in Health and Safety and is currently awaiting the outcome of the Level 4 Certificate of School Business Management.

As a School Business Manager Julie brings experience and knowledge of working in a school academy setting that has undergone OFSTED inspections. University Technical Colleges promote applied learning through their curriculum so are fundamentally different to mainstream education, and Julie believes there are some similarities to the education provided at SDSS. Therefore can identify with the challenges SDSS will face having now been informed they will be inspected under OFSTED.

In her spare time she enjoys spending time with her husband and three dogs, taking long walks on the moors or at the beach or looking after her young grandchildren who visit often at weekends.

Kaycee Fordham
Senior Leadership Assistant and Admissions, Marketing & Communications Manager
Kaycee has a varied role at the school, taking responsibility for Admissions and Concerns and Complaints. She also provides administrative and practical support to the School Management Team, including undertaking specific projects. Kaycee is a member of the College of Management.
Before joining the school in February 2015, Kaycee had been a director of a raw chocolate business, which she co-founded in 2007. Kaycee has also worked in recruitment and temporary staff management, and been involved in the development of a number of small businesses (with a sales and marketing emphasis). She entered the education sector in 2005, when she took the role of Communications Administrator in a mainstream primary school, a formative experience which informs her approach to her work for our school.
Kaycee is a mother to four children, two of whom attend the school. She lives off grid on Dartmoor with her family, dogs and chickens. She enjoys wild walks, beach days - and rare quiet moments!

​Becky Morrow
Receptionist
Becky is our full time receptionist and parent of three children currently attending the school.
She has lived and worked in the area since 1996 in various front line positions predominantly as a Housing Officer in the area and has had connections with the school since it started in 1981. After returning from a 6 year spell in New Zealand, she started up a business producing biodynamic fruit cordials in the area before taking on the position of our receptionist in 2013.

​Gaby Wood BA
Designated Safeguarding Lead, Co-opted member of SLT and Office Manager
Gaby was born and raised in Germany and started her working life with an apprenticeship in industrial sewing which, on completion, took her to work in and around Hong Kong for 18 months. She then completed a business degree in London and continued her working life in fashion retailing before attaining a BA in Health Sciences and completing a 3 year-part time Homeopathy course.
After starting a family, life took her to Cumbria, and from there, via a brief stay in France, she arrived in Devon and became a school parent first before working on reception for 3 years and moving across to become an administrator.
Her work expanded into joining the safeguarding team as a designated safeguarding person, then the deputy lead and since September 2017 the Designated Safeguarding Lead. 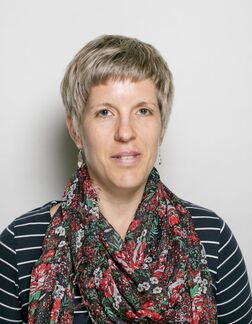 ​Karola Hassall MA PGCE
Visiting Students Coordinator and Designated Safeguarding Person & Designated Teacher for Looked after Children
Karola Hassall was born in Germany and studied Archaeology, History and Scandinavian Studies in Bonn and Reykjavik (Iceland). Before completing a PGCE in modern Foreign Languages with Worcester University and starting a family, Karola attained a Magister Artium (MA) and worked in the publishing industry for 11 years as a journalist, editor and translator. She also did a two-year "voluntariat" in journalism and publishing, the equivalent of a postgraduate trainee ship.
She moved to the UK in 2009 and now lives in Devon with her young daughter whilst enjoying her role at the school. In her spare time, she likes reading and writing and has published a book of short stories with AWEN Publications in 2011.
Karola has expanded the school's visiting student programme. She also teaches English as a Foreign Language to visiting students.

​Jacqueline Buehler MA
Summer Language School Coordinator
Jacqueline joined the school as the Overseas Student Coordinator in February 2016. She organised the Visiting and Exchange Student Programme during term time as well as the language courses for international students during the summer holidays. Jacqueline successfully managed the first phase of the expansion of the school’s overseas student programme which has since been taken over by Karola Hassall. Jacqueline then shifted her focus towards organising and running the Summer Language School in 2017.
Jacqueline enjoys working with international students during the active and cultural Summer Language School courses. Jacqueline worked as a German Language teacher before joining this role at the school. She taught literature classes to German mother tongue speakers and German as a foreign language to international students at a private boarding school in the U.K. as well as other locations. Jacqueline was first involved with the school providing German after school classes in 2014 after finishing her M.A. studies in Germany. She studied Modern Literature, Linguistics and Psychology in Munich. Since 2014 Jacqueline lives in Devon and enjoys the beautiful and inspiring surroundings. When she is not in Devon to run the Summer Language School, she is culturally active in Europe.